KOTA KINABALU: A durian species is turning heads among visitors to Sabah, thanks to its uniquely reddish flesh.

Known among the Kadazandusun community as sukang or tabelak, the fruit is also called “durian hutan”, as it is mainly found growing wild in the jungles of Sabah. 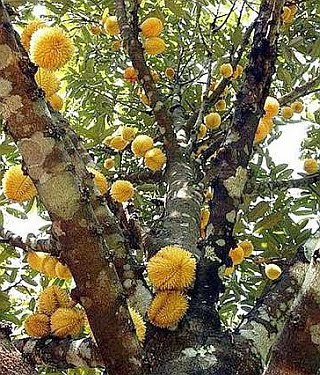 Thorny abundance: A sukang or ‘durian hutan’ tree heavy with fruits during its fruiting season.

Sabah Tourism, Culture and Environment Minister Datuk Masidi Manjum said he did not know anyone cultivating sukang (its scientific name is Durio gravolens) as there was generally not much enthusiasm among locals for wild durian.

Its flesh is said to be thinner and drier compared with the cultivated fruit which is of thicker and creamier texture.

The taste is about similar with other durians, although some have described it as sweetish sour.

Masidi said the sukang’s main attraction is its red-coloured flesh. 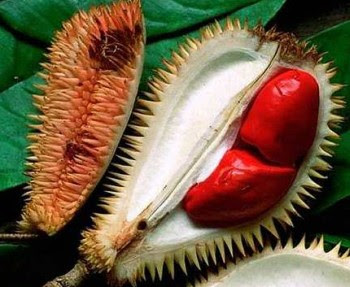 Rare colour: Once opened, the red flesh of the sukang is revealed.

“That’s the main thing that makes it stand out,” he said, adding that this type of durian also fetched a lower price than the more common fruit.

The small-sized fruits, some about the size of a sepak takraw ball, are sold for as little as RM2 to RM3 when they are in season.

Masidi, who grew up in interior Ranau where sukang are plentiful, said some people who had tasted the fruit for the first time claimed that it had a more potent “kick”.

“Maybe it’s because this particular type of durian is generally more pungent,” he added. Others who have tasted sukang describe it having a carrot-like flavour.
Posted by Assoc. Prof. Dr. Richard Ng at 11:59 AM