IT’S another food item that is synonymous with Penang, and something that no visitor to the island will leave without buying either to enjoy as a light snack or to take back as a gift for relatives.

After all, Tau Sar Pneah, otherwise known as Dragon Balls or Tambun Biscuits, is one of the few things you can transport far without compromising on taste or quality. 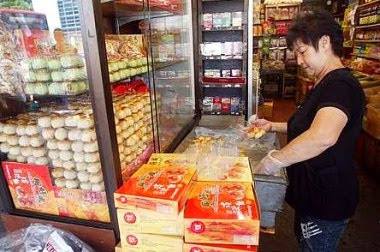 The little rounds of light flaky pastry filled with a sweet or savoury paste made of mashed green beans (tau sar) and a rich, underlying aroma of fried shallots are delicious straight out of the oven, though few would be so fortunate as to enjoy them this way.

However, if you freeze them as soon as you get them (I’ve frozen mine before), then defrost and put them in the oven for a brief spell, they will come out almost as crispy and tasty.

When you want a whiff of Penang, what better way than to tuck into one with a nice hot cup of our white coffee? 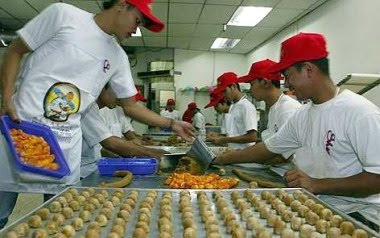 Hard at work: Sheng Hiang staff putting together the biscuits.

There are several well-known brands available but what was surprising even to me was the number of less well-known ones. Most also manufacture or retail other well-known Penang products like Beh Teh Saw, Hiao Peah, Dodol, nutmeg and the like.

And the flavours! Who would have thought the humble dragon ball would have evolved to include so many different tastes: there were pandan, coffee, orange, dried shrimp and even durian! And this was just the tip of the iceberg. So during one of my sojourns to Kuala Lumpur, I brought seven makes of the biscuits and got a panel together to try them out. 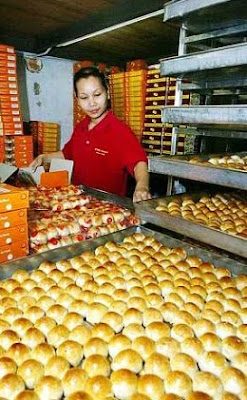 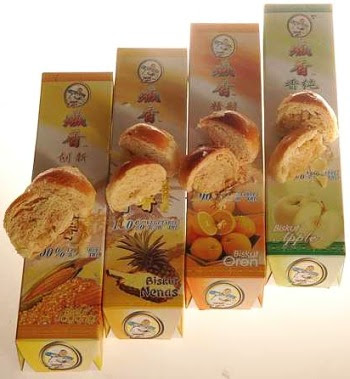 Sheng Hiang: Also established over a decade ago, now with several branches in Penang. They are famous for their “fruit” flavours although apparently their “sambal udang” is the most popular. 19, Kimberley Street, 10100 George Town, Penang. Tel: 04-261 9928

Ghee Hiang: One of the best known, it was established in 1856; probably the patriarch and oldest biscuit company in Penang. The old shop in Beach Street is still there, but they have introduced several outlets in town for easy access.
The fruit-flavoured Tau Sar Pneah that comes in corn, pineapple, orange and apple.
How the various Tau Sar Pneah stack up

Faridah: Moist and quite authentic, although a bit sweet for me.
Grace: Nice combination of sweet and savoury flavours. Lovely melt-in-your-mouth feeling.
Majorie: No crispy shallots but otherwise above average.
Helen: Sweet but tasty.

Faridah: Good onion flavour, great taste.
Grace: Strong hint of onions and margarine which make the pastry a winner!
Majorie: Not too dry, just nice.
Helen: Liked the thin layer of pastry but a tad too much margarine.

Faridah:
Pineapple: It’s got bits of pineapple in it. Orange: Nice fragrance but not my cup of tea.
Apple: Hmmm.
Sweetcorn: Bland.

Grace:
Pineapple: Would have preferred a pineapple tart.
Orange: Love the smell and taste. Goes well with the tau sar.
Apple: Crunchy apple bits make it interesting but taste is hard to trace.
Sweetcorn: Hard to suss out the corn taste.

Majorie:
Pineapple: Reminds me of pineapple tart filling. Not bad.
Orange: OK.
Apple: Apple bits a wee bit too hard. Reminds me of nutmeg bits.
Sweetcorn: Not too keen on this.

Helen: As a traditionalist, I found I preferred the good, oldfashioned flavour with no enhancements!

Faridah: Dry and no fragrance.
Grace : Like the onion smell.
Majorie: A bit dry, and not so sweet so less than satisfactory.
Helen: A bit bland.

Faridah: Great taste, although margarine flavour a bit overpowering.
Grace: Liked the sweet/savoury sensation and onion bits.
Majorie: Nice aroma of crispy shallots and not too dry.
Helen: A strong taste of margarine.

Pandan
Faridah: Surprisingly good, moist and fresh tasting.
Grace: Lovely combination of flavours.
Majorie: The pandan in the skin brings out the flavour.
Helen: Quite “pandany” but pastry is a bit thick.

Conclusion:
Generally, the “other” flavours proved less popular. It came as no surprise why the traditional ones have remained firm favourites for all these years.
Posted by Assoc. Prof. Dr. Richard Ng at 9:48 AM No comments:

Simple dim sum-styled lunch for those on the go - Star

Lunch hour can be extremely precious for some, especially when you have to run between meetings while trying to get a decent meal.

At Traders Hotel, the situation was not getting better, with staff members finding it difficult to cope with the long list of orders from patrons, according to sous chef Irwin Chan Kwan Wing. 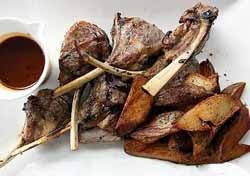 “It is difficult when everyone comes in at the same time and order different food but want it served quickly,” said Chan.

The 29-year-old, who had been working at the hotel since it opened three years ago, said he came up with a “dim sum styled” lunch for his patrons minus the hot steaming trays.

The concept is simple, Chan cooks according to a list of dishes on the menu from appetizers to mains while the waiters take turns to bring it to guests at their table.

“It is simple, they just pick and the waiters will bring it to their table, something like dim sum where you get to choose what you like when the carts are brought around,” said Chan who came up with the idea for the Unlimited Upstairs Lunch Menu. 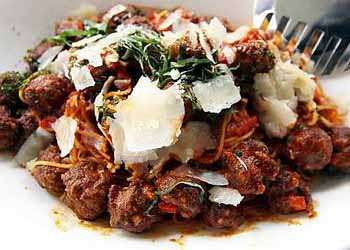 Patrons can start with appetizers like the Deep Fried Wild Mushroom Risotto Ball, Mini Caesar Salad with Roasted Chicken or the Pan Sear Scallop with Orange Reduction before moving on to a warm soup of Pumpkin with Smoke Salmon.

Once you have had enough and think you are ready for the mains, just call on the waiters and they will bring you their popular grilled specialities such as the Grilled Baby Chicken with Chimichuri Rub, Grilled Australian Black Angus Beef Sirloin with Roasted Zucchini and Eggplant and the Rock Salt Baked Live Sea Bass with Braised Vegetable, which are fixed items on the menu.

To make things interesting, Chan also throws in some surprises through the main courses every day based on what his mind and creativity dictate for the day.

During the review, we had the chance to taste three extras for the day, which was the Grilled Lamb with Roasted Vegetables, Braised Live Mussels and the Spinosini Pasta with Beef Meat Balls. 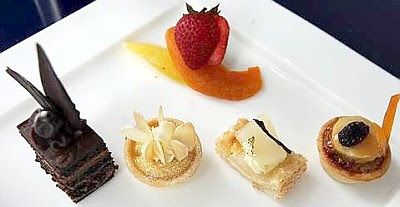 However, if you have a sudden urge for another round of Risotto Ball in the starters list, feel free to do so and do not worry about your friends, who are probably on their way to desserts.

Chan said with the new style, patrons can also try their new dishes instead of just ordering one for lunch.

“You don’t have to think too much about what to have for lunch with our quick and easy concept,” said Chan. 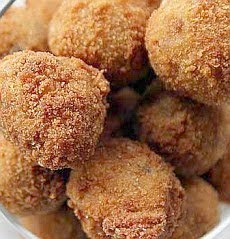 He added that the menu had been well received by the regulars at the hotel as it was fast and the fact that not much waiting was required.

To end the lunch on a sweet note, guests can take a pick from Chocolate Sacher Fudge Cake, Caramelised Banana Coconut Tart, Peach Saffron Tart or Pear Jalousie to go with Tea or Coffee.

The Unlimited Upstairs Lunch Menu is available from noon to 2.30pm daily. It is priced at RM50++ (with free flow of soft drinks) or RM60++(with a glass of wine).

EVERYONE is looking for cheaper meals these days. Sets that offer complete meals with drinks and desserts are often the top choice.

Apart from it being quick and affordable, it also saves you the trouble of pondering over a long lunch list that could take up most of your lunch time. 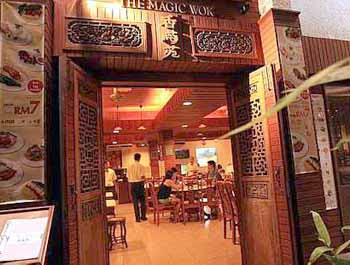 Neighbourhood restaurant: The Magic Wok had been around for the past nine years.

Joining the bandwagon of restaurants that offer quick lunch sets, Magic Wok Restaurant in Damansara Jaya had introduced some interesting lunch sets that are faster and cheaper.

“People want their food fast but not many are fond of crowded coffee shops where finding a proper parking spot during lunch time can be a trying affair,” said Magic Wok director Alicia Foong.

However, visiting an air-conditioned restaurant may be too expensive and many may not be able to afford it daily.

That was when Foong decided to offer “Value Quick Lunch” deals at just RM7. 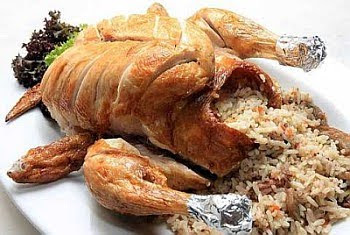 Filling meal: Every 14th of the month, the restaurant offers its takeaway promotion of Golden Roast Stuffed Chicken.

Each set also comes with a drink of the day (Barley or Soyabean), fresh fruits and free flow of Chinese tea.

If you still have the time or space after a hearty lunch, then you can try their host of side dishes like Fish cake Tofu, Wantan Soup, Fried Wantan, Mushroom Chicken Claws, Lou Sui Pork Mix , Fried Shui Gao and Shui Gao Soup priced at just RM6 per serving.

Foong said she was surprised that the lunch deal, which was introduced in March had been a hit with their customers considering it was the first time the restaurant offered noodles.

“Before this, we never thought of selling noodles as we were comfortable selling typical Chinese dishes to go with the plain white rice.

“By serving noodles, our customers get the meal faster and they can take time trying our other side dishes, too,” said Foong who started the restaurant nine years ago. 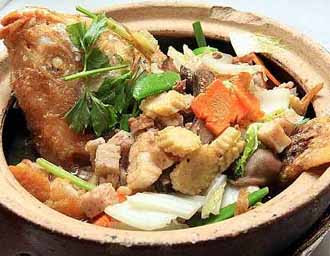 The lunch deal was not only aimed at customers working nearby but also families on weekends.

It is available from Mondays to Saturdays from 11.30am to 2.30pm while on Sundays and public holidays it is from 10am to 3pm.

Every 14th of the month, customers can take home a Golden Roast Stuffed Chicken for only RM30 while on the 28th of every month they can buy the Herbal Roast Duck for RM33 by placing the order a day in advance.

“We started selling stuffed chicken for Christmas two years ago as a substitute to turkey and the promotion was well received.

“However, we did not want to make it a permanent item on the menu, hence we came up with this monthly promotion,” said Foong.