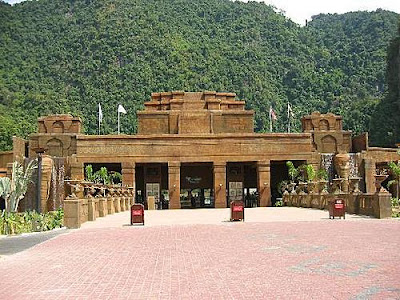 Be prepared for some scandalous animal stories when you visit the petting zoo at the Lost World of Tambun in Perak. 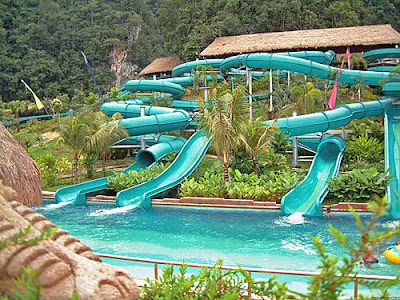 AT the last count, the animal population at the petting zoo of the Lost World of Tambun numbered 4,000, and all are descendants of those at its sister park at Sunway in Petaling Jaya. The only “newbies” are 40 tortoises whose pond is just next to a 10m-high waterfall fed by fresh river water running from the limestone hills of Kinta Valley.

According to Calvin Ho, the general manager, these tortoises were rescued from a temple in Penang after it was found that they were living in terrible conditions. To compound the problem, the temple authorities found out that poachers were stealing the land reptiles and selling them to restaurants. 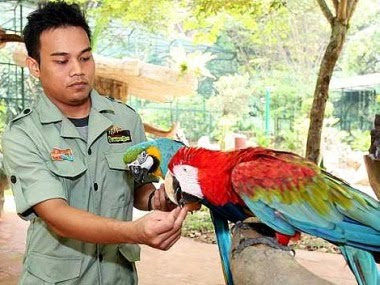 Concerned that these revered crepusculars were coming to such a bad end, the temple authorities called Ho for help.

There are plenty of such anecdotes at the 7,432 sq metre “wildlife resort”.

The visitor will get to meet a cobra which had to be spoon-fed after it hurt its throat, no thanks to rough handling from villagers who had found it lurking in a chicken coop.

There is also a marmoset named Ron who has since become Ho’s best friend and confidante.

“There are no dark secrets but he knows quite a lot about what’s going on in my head,” quips the 44-year-old father of two who often starts his day by sitting among these cute furry mammals.

Then there are the raccoons who reside near the zoo’s entrance. If the animals had a gossip tabloid, the best fodder for it would come from a certain male raccoon here that has acquired quite a reputation for being a highly amorous “playboy”.

“The fellow mates no less than a couple of times within an hour,” affirms Ho.

What makes for the contentment and wellbeing of the animals in the Lost World of Tambun is the care they are being given. 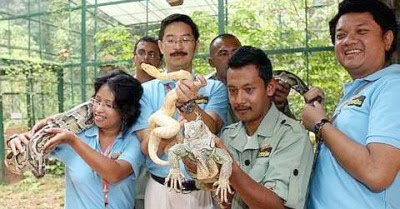 Close interaction: Visitors can have direct contact with the animals.

According to Ho, the two crucial aspects lie in the conditioning and enrichment programmes devised by the curator and the keepers.

“The animals in our care are not just fed and expected to eat and sleep. To keep them active and stimulated, the keepers place their food between rocks or on branches. The animals will have to locate the grub with their senses,” says Ho.

The petting zoo, insists this Penang native, is about simulating the natural habitats of the animals to encourage them to hunt and forage for food. This keeps them alert and ensures their good psychological and emotional well being.

“The idea is to allow them to live in a habitat that resembles conditions in the wild,” says Ho.

In simulating the natural habitats of the animals, Ho reveals that first of all, no trees were chopped down during the building of the petting zoo which took four months to complete.

No effort was spared to preserve the original flora and fauna of the area that’s set within the majestic limestone hills of Ipoh. Even the water for the streams and waterfall is channelled from a river, which means chlorine-free drinking water for the animals. Extra vegetation such as creepers and trees were planted to treat soil erosion.

Ho attributes the tame disposition of the animals to the constant positive conditioning from the keepers. He eschews the word “train” as he feels that it carries negative connotations like the use of cruel methods.

“When it comes to animals, the interaction has to be like a relationship, like making friends. Just like people, animals, even among the same species, have different personalities. Some are feisty, others adapt more easily.

“When it comes to conditioning a bird to feed from a visitor’s hand, for example, this is the result of the interaction that has taken place between the animal and the keeper. It shows the deep relationship and understanding that has deve­loped between the two,” says Ho.

Exposing the animals to people, even those which have been previously mistreated by humans, will have drawbacks, but Ho feels such situations can be controlled.

“There are some people who derive plea­sure from seeing animals suffer. It is disgusting to watch and I feel that awareness should be raised through education. However, when we took on the running of the petting zoo, we also made sure that the animals’ keepers are there to supervise the interaction between visitor and the animal,” Ho says.

So, besides caring for the animals, the keepers also need to have a basic understanding of human behaviour.

“Sometimes, visitors are goaded by their friends or are pressured to drape a snake around their neck when they are just not ready for that sort of action. In this case, the keepers will size up the visitor to see how they can best experience the human-animal interaction minus the impositions,” says Ho.

So, what can the visitor expect to experience at this petting zoo, aside from getting to stroke the animals? Well, there is the serpentarium, a glass tunnel which allows the visitor a 360° view of the snakes and reptiles in the zoo’s collection. This will be as close as one can get to the pythons and monitor lizards clinging to the glass on top, below, by the sides and at one’s feet.

Then there is the boardwalk which winds across the Rock Canopy like a rainforest trail. This set-up brings a visitor to a natural paradise where hornbills, macaques, porcupines, prairie dogs and African goats are left to roam free. At the end of this trail is a platform which offers a breathtaking scenery of the wetlands area where Rajah Brooke butterflies can be seen fluttering among wild boars, squirrels, kingfishers and pangolins.

High on the adorable meter is the warrens where cute bunnies with their floppy ears can be seen hopping around.

Children can also do “longkang fishing”, a term coined by Ho, here.

“There are baby carp swimming in a small stream and children can scoop the little fish into their nets,” says Ho.

However, Ho reiterates that there is a clear line drawn on using animals for entertainment.

“The petting zoo is geared towards education, where children can learn about animals and the role they play in the ecosystem. This is crucial because if one link is broken, there will be an imbalance and this will have a negative effect on us in the end,” he says.

While one may argue that books, audio and visual means are able to perform the task adequately, Ho firmly believes that there is no greater teacher than real-life experience. As to whether the animals are happy, Ho gamely points out that their ability to mate and breed is a sure sign that all is well.

This can be seen in the aviary where eggs and new hatchlings can be found in the nests.