THE 137-year-old Paloh Koo Miu Temple in Ipoh Old Town will be promoted as a tourist attraction.

Perak Non-Islamic Affairs Committee chairman Datuk Dr Mah Hang Soon said the temple, together with Little India and the Concubine Lane nearby, could give Ipoh’s tourism sector a boost. 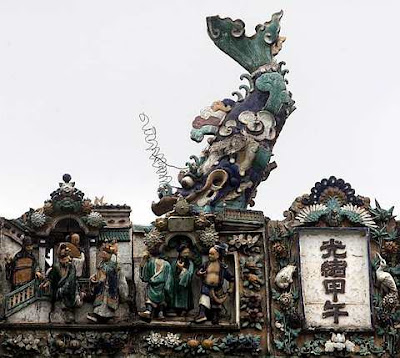 Part of the intricate carvings atop the 137-yer-old temple which will be promoted as a tourist attraction.

“With proper packaging, these three places can be included in the state’s tourism map,” he said after visiting the temple recently.

Noting that the temple is older than Ipoh city itself, Dr Mah said it had valuable antiques and interesting statues which could draw in visitors.

Among them are images of fairies and deities on the walls and roofs, brass urns and a large bell. 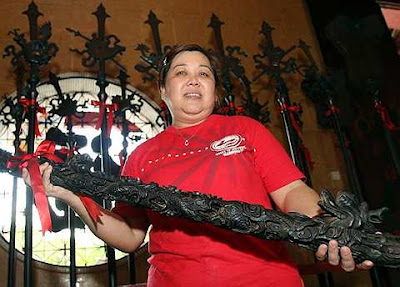 A caretaker of the Paloh Koo Mui Temple in Jalan Bijih Timah holding a 'weapon' crafted out of wood.

Dr Mah said assistance would be provided by the state to help promote the temple.

He also announced an allocation of RM200,000 for the temple to help its committee preserve and upgrade its amenities.

The temple is known to locals as the Ipoh Chinese Tai Pak Koong Temple because of its worship of the deity.

In the olden days, it used to offer free medicine and consultation to local folk.

People with disputes even visited the temple to seek justice during its early years.

Among the temple’s milestones was when it established a free school for pupils considered too old to be admitted into government primary schools.

For those interested to visit the temple, it is located at 91, Jalan Bijih Timah.
Posted by Assoc. Prof. Dr. Richard Ng at 10:05 AM