The arrival of the Ipoh-born former Bond girl sparked off a chain of bright flashes from cameras as Yeoh was escorted to the grand event held on Deepavali eve.

Yeoh, who launched the project with Ngeh, lauded the project, adding that she hoped more people would come forward to develop the state together with the Government.

She said the days when tin miners were the main economic force for Perak were long gone and the tourism industry should be the foremost for the growth of the state. 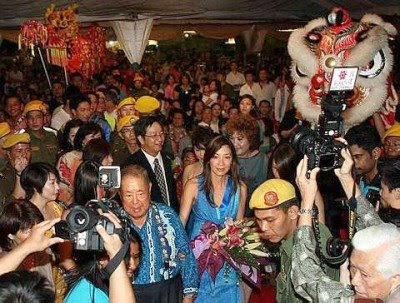 Grand entrance: Yeoh walking to the stage at the launch of the project in Ipoh on the eve of Deepavali. With her are her father Datuk Yeoh Kian Teik (in front of her), mother Datin Janet Yeoh (behind her), and Morubina Group of Companies managing director Ting Sing Yiew (behind Kian Teik).

“We can’t just ask them to visit for the day and go off somewhere else. We want them to stay and enjoy because there’s so much to do in Ipoh,” she said.

Ngeh stressed that the state government would welcome local investors who want to bring prosperity to the state.

The RM200mil Kinta Riverfront project, which runs along 1.2km stretch on both sides of the Kinta River, will feature the city’s first five-star hotel and service suites.

Replicas of the world’s famous bridges, bazaars, shops and mini theme parks were also planned in the project, which is expected to be completed within two years.
Posted by Assoc. Prof. Dr. Richard Ng at 1:16 PM