Putting the roar back in Ipoh - Star

With hidden treasures such as food, interesting sites and colourful goings-on, Ipoh promises to be a place you just want to stop at a bit longer.

Ipoh seems to have it all. Yet somehow it doesn’t quite make it on everyone’s “must-visit’’ list.

There has been talk of revitalising the city for some time now. But until things get up and going, Ipoh is like a race-horse that keeps running but never crosses the finish line. 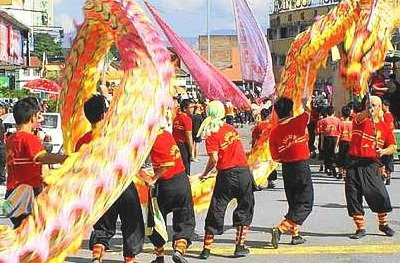 In synch: Dragon dance is an integral part of the Nine Emperor Gods festival which is celebrated with gusto in Ipoh. – CHING TECK HUAT

The problem can’t be the food. I asked my doctor, who’s from Ipoh, about the town specialty? He drew me a rough map to two exceptional “makan” shops - Lou Wong and Foh San.

Taugeh (bean sprouts) chicken is a favourite of Chinese cuisine connoisseurs and Restoran Lou Wong Taugeh Ayam Kuetiau in the town centre serves the real McCoy. Lou, (pronounced “Lo” which means “old”, an affectionate reference to Mr. Wong’s restaurant which has stood the test of time. The outlet which has been around for 51 years and dispatches something like 140 chickens a day is practically an institution in itself. Half a chicken, a heaping plate of succulent bean sprouts (taugeh) drizzled with aromatic black sesame oil and a steaming bowl of soup with fish and pork balls cost only RM17.

Just a stone’s throw away is Foh San, a venerable dim sum restaurant set in an old building which also houses the Perak Chinese Amateur Dramatic (sic) Association. People tell us their dim sum is sold out before noon.

Then there is the legendary Ipoh White Coffee, which has as many taste variations to it as there are coffee shops who serve it. But there’s no mistaking who’s the king of the coffee bean hill there. Only the grubby-looking Sin Yuan Loong pulls them in like no other. 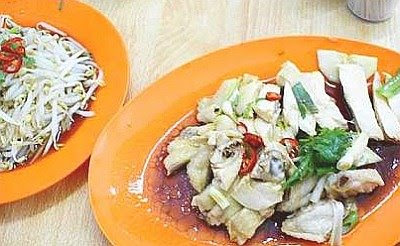 Shopping isn’t a problem. You have the landmark Ipoh Parade, Greentown Mall, Yik Foong Complex and The Store. Hotels are good, clean and cheap. We stayed at the Regalodge, which has all the trappings of a three-star hotel - free Wifi access, stocked-up fridge, long bath and get this - a 37” Sharp LCD TV in every cosy room. A double room set us back by only RM116, with local buffet breakfast thrown in. There are also at least four hospitals, 12 schools, three colleges including a medical college, a library, two museums and a lovely park (Seenivasagam Park).

Then there are the cave temples Sam Poh Tong and Kek Lok Tong, which have been tour highlights for decades.

Despite it all, there’s definitely something missing. Ipoh, the third largest city in Malaysia (after KL and Penang) falls behind even Johor Baru in terms of dynamism and visitor traffic.

So what’s there in Ipoh to keep them coming?

Maybe it needs a good shot in the arm. like the parade of the Nine Emperor Gods festival. We arrived just in time to witness it.

There were prancing Chinese lions, serpentine mythical dragons slicing through the air, processions of flower and lantern-bedecked floats with participants throwing sweets or handing out “tortoise” buns (red buns shaped like tortoises) to spectators, traditional dances and marching brass bands.

There were wildly rocking sedan chairs upon which were seated “dieties”. The weight of their spiritual power was said to be so great that the sedan bearers were swinging and swaying as though the chairs themselves had come alive.

There were Chingay performers struggling to balance massive flagpoles alternatively on foreheads and open jaws and Indian drummers. There was also a Hindu devotee pulling a chariot with hooks enmeshed in his back. Call it what you will. A parade. A procession. A carnival even. It was spectacular.

If it carries on in this scale every year, it could become an international tourist event.

The festival culminated in the fire-walk on the night of the ninth day. Only devotees who were spiritually cleansed - strict vegetarian diet, no smoking, drinking and gambling for nine days - could undertake the bare-footed walk over the pit of smouldering coal. If your tootsies get burnt, it means you’ve been cheating. (That’s the spiritual explanation of the day.) 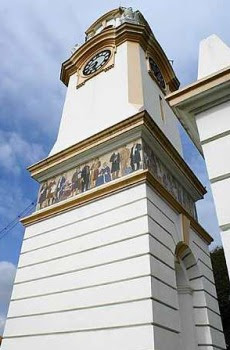 The Birch Memorial Clock Tower built at the turn of the century.

Meanwhile, between now and the next Kow Wong Yeh or Nine Emperor Gods festival, perhaps the town council could place historical attractions under its protection. We visited Birch Memorial Clock Tower at Jalan Datoh Sagor. I read somewhere that Datoh Sagor was among a trio who assassinated Birch in 1875. Birch may have been a nasty fellow and asked for it but I think the memorial tower in his name deserves better.

None of the four faces of the clock was working and someone had dumped a broken deckchair on the platform. Unveiled in 1909, the Victorian clock tower, with its captivating murals is history worth preserving.

The city road signs too are uni-directional at T-junctions and crossroads. Guessing or taking a blind shot at what the other road is can be a wearisome game for outsiders. Ipoh has a historical past. It is a shame to let it fade away. The old names of city roads if shown alongside the new ones, would certainly stir interest in Ipoh’s beginnings. Appreciation starts with knowing the city’s roots.

I believe Ipoh has the right ingredients for a revival, it just has to work on its formula.

The article is written in the spirit of Visit Malaysia every year. The writer believes unbiased, constructive comments will only spur Ipoh and its town council to greater heights.
Posted by Assoc. Prof. Dr. Richard Ng at 4:29 PM