Wine blogger shares tips on getting the best - Star

CREATING symphonies with spirits is what Ron Khoo does best. No, he’s not a medium, instead he is involved in wine, and lots of it.

Being a wine importer, distributor and retailer, the 34-year-old entrepreneur not only owns two IT companies and a recording studio, but is also the proud owner of several Wine Cellar and Tasting Room outlets.

When I was invited to sample some of his wines and the exquisite dishes whipped up by his chef, I got to know him and we became friends.

According to him, his first foray into the blogging world was about five months ago when he set up ronkhoo.com, a place for him to share his experiences with wine, food and travel. 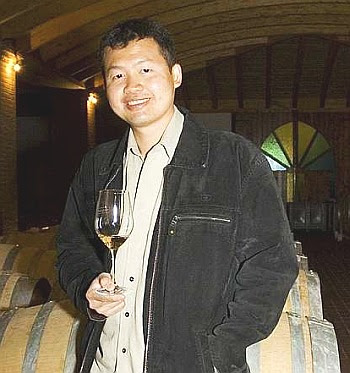 The expert: Ron Khoo holding a glass of Soave in a winery in Valpolicella, Italy.

One of the most distinctive features of his blog is an introduction to matching wine and Asian cuisines, a rather extraordinary and refreshing concept.

There’s even a section on his blog called Your Matching Experiences where readers are invited to share their views on interesting food and wine pairings.

“Eventually, I want my blog to become a virtual database of my wine knowledge. It will have a listing of the thousands of wines I’ve tasted, my wine tasting ideas, my wine education series, my food and wine matching recommendations and stories of my overseas wine travels.

“This will also act as my own resource centre where I can log in from anywhere in the world to access information about a certain wine I’ve tasted and want to recall at that moment,” he said.

Khoo admitted that blogging had made it easier to update friends, colleagues and associates on what he was doing.

“I used to e-mail the same stuff to many people when they asked me. Now, I just point them to the URL. I’ve also learnt to become more observant when I travel and when I experience new things.

“I’ve also met new people from the blogging community and it’s interesting to have cross discussions on each other’s blog,” he said.

An evening out with Khoo is intriguing — dining at roadside food stalls with two tall glasses and a bottle of Nivole Moscato d’Asti (which, by the way, is my favourite wine) is definitely an experience to savour. It is also almost guaranteed to attract stares from those sitting at tables around you.

Like most wine lovers, Khoo’s affair with wine began when he was in his early twenties.

“The first time I had wine was in university — one of those living skills you pick up other than the academic ones. Of course, it started with the cheap 99 pence stuff at the local supermarket as we just could not afford to buy good quality wines.

It was not long before Khoo met a few people with similar interests and he began a business venture into the wine industry, setting up shop and bringing in a first shipment of wines. So far, Khoo has tasted thousands of wines from different parts of the world. His two favourite wines are the Gunderloch Nackenheim Rothenberg Riesling Trocken­bee­re­nauslese 2001 and the Domaine Dujac Morey St. Denis 1976.

I asked him to share an interesting fact about wine that not many people would know and he said he could share the story of an obscure grape called the Saperavi used by Georgian winemakers to make a sweet red but he felt it was only meaningless trivie.

“One thing important to remember is that each wine has its own ageing capability bell curve. It doesn’t always mean the older the wine, the better so don’t age a wine unless you know it’s worth it. Always ask the person you bought it from. They should know,” Khoo said.

Apart from wine, Khoo is also into fast cars, golf and photography and he also enjoys spending time with his wife and two dogs whenever he can. As a parting note, Khoo said the best wines to go with a lighter style of Bak Kut Teh would be the Cava from Spain or a light-medium bodied Cabernet Sauvignon from Chile.
Posted by Assoc. Prof. Dr. Richard Ng at 8:30 PM