During durian season, the sleepy towns of Lenggong and Gerik spring to life as fruit vendors line the streets with their haul of the season’s tropical fruits.

IT is that time of the year again when scores of makeshift stalls crowd the roadsides, all packed with mountains of South-East Asia’s King of Fruits – durians.

Recognisable both by sight and smell, these spiky, dark-green goodies need no introduction to Malaysians.

In fact, those who wait in anticipation every season would know that this year’s harvest bears fruit that tastes even better, thanks to favourable weather conditions during cultivation. 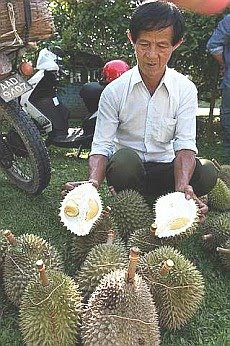 Farmer Chin Chan, 59, showing the thick, yellow pulp of the durians at his home in Lenggong.

And of course, often going hand-in-hand with these succulent delights are some of the other famous tropical fruits like the dukong, mangosteens and rambutans.

In the usually quiet towns of Lenggong and Gerik in northern Perak, the fruit season is the one time in the year when the pace picks up as fruit vendors flock to the open streets to set up shop.

At Osman Baba’s 4.6ha orchard in Gerik, the output of his over-80 durian trees fill up almost five lorries of durians daily, with each lorry carrying over 1,500 fruits.

At cost price, his durians are often sold at RM4 per kilo to dealers, who would in turn mark the price up further when selling to vendors or customers.

“This is really a great season for the durians. Here in Gerik especially, the durians are well sought after as they are grown on hilly terrain,” he said.

Osman added that the durians from Gerik were often supplied to vendors and dealers from as far as Penang, Ipoh and even Kuala Lumpur.

“Many people do not know about how good the durians in Lenggong and Gerik are. We are often forgotten because these towns are small and obscure.

“But if you really come out here and try for yourself, you’ll realise that some of the best durians can be found in any orchard in our towns,” he said.

His best fruits were mostly thick-pulped, as creamy as ice cream and left a sweet aftertaste.

In fact, the pulp is so rich and creamy that it is near impossible to finish one whole fruit in one sitting.

“I have a few types of durian grades. But the most common ones that I grow are the D24 and the D88 durians,” he said.

Such clones, and ones like the D26, are the thicker-pulped types of durians, much unlike the smaller, sweeter kampung durians.

“It depends on your taste buds of course, but in general, people like the fleshy durians.

“With those, one fruit is good enough for two or three persons!” said Osman.

Many others, he added, love the Raja Kunyit variety of durians, which are also thick-fleshed and are usually a brilliant shade of yellow, as its name suggests.

“The Raja Kunyit breed is a favourite, of course. The pulp has a very strong, power-packed taste that hits all your taste buds at once,” said Osman.

Unfortunately, the Raja Kunyit durians from Osman’s orchard were still on the trees during our binge session. 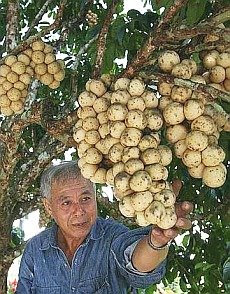 Besides durians, Osman also has a fair number of mangosteen and dukong trees at his orchard.

“Usually, during the durian season in the months of June and July, the mangosteens and dukongs are also ready for harvest.

“This is why these fruits are often sold at the same time, along with rambutans.

“Of course, many people like to eat mangosteens after eating durians because it cools one’s body down,” he said.

Like his durians, Osman’s mangosteens and dukongs are equally good.

“I believe the one reason why my fruits are often good is because of the maintenance of my orchard.

“I make sure that I pamper my fruit trees with the right kind of soil and I keep the place spick and span. I think this helps,” he said.

In fact, Osman is so proud of his orchard that throughout the season, he brings in large groups of his buddies from all over to feast beneath a man-made tree house located amidst his fruit trees.

During a certain time of day, the orchard becomes almost postcard-perfect; the afternoon sunlight filters through the trees, bathing everything in a golden sheen.

The air there is often cool due to the high altitude and at every interval, one would hear the distinct “thump” of a durian falling from a distant tree.

Just be careful where you tread – a durian on the head could definitely prove fatal indeed!

In Lenggong, those who know of brothers Chan Ong @ Chan Onn, 61, and Chin Chan, 59, and their “special” varieties of durians, often flock to their orchard during the harvest season. This is because the brothers are known to grow only the best varieties – those which they have sampled from all over and brought home to plant. This also applies to their dukongs, rambutans and cempedaks.

Even the dukong and rambutan trees grown at their single-storey home in town produce good fruits.

But do not ask them the names of those varieties for the duo would not be able to answer you. 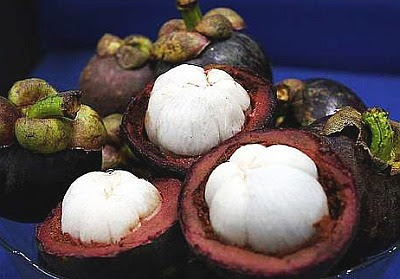 The sweet and sour taste of the mangosteens are also a firm Malaysian favourite.

“All I can say is that our dukongs are juicier than other types.

“As for our durians, I don’t know what names they have. All I know is that they are the best and those who buy from us know it too,” says Ong.

Any doubts can be removed with a just one bite of any one of their durians.

Ong’s durians are a myriad of different varieties – one fruit has a thick and yellow pulp, another is so pale it is almost off-white while the others are the common pale yellow with tiny whitish seeds.

However, the one thing they all have in common is this; they are all succulent and juicy, with an abundance of soft flesh that wrinkles when their surfaces are pressed and they all taste even creamier than ice cream.

In fact, Ong’s durians are so good that they could fetch a high price of up to RM25 or RM30 per fruit at the stalls.

Buying it directly from him at the town centre however would cost about RM15 or so, depending on the size of the fruit.

Of course, if you’re too lazy to drive out that far just to buy durians and don’t want stink up your car interior when you transport the fruits back, you could settle for the closest roadside stall in your neighbourhood.

And if the vendor tells you his fruits are from Lenggong or Gerik, then brace yourself for an unforgettable durian experience! 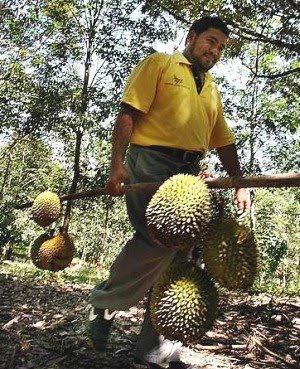 At Osman Baba’s orchard in Gerik, a day’s harvest of durians can fill up to five lorries daily, with each carrying about 1,500 fruits.

Here are a few helpful tips on how to choose durians:

1. Make sure the fruits are unopened before taking a close whiff . The good ones usually emanate an extremely strong, pungent scent.

3. Sweep your nails against the surface of the durian skin and listen for a hollow sound.

4. Durians do not necessarily have to be heavy to be tasty. The smaller, lighter ones could be equally as good as those with thick pulp .

5. If the vendor makes the effort to prise the durians open for you, select the ones that have a wrinkled layer of skin on the pulp

6 . To prise open a durian, look for its opening point that resembles a pathway or a visible line amongst the durian’s thorns that will begin from the bottom of the fruit. The line is usually visible when you see two rows of thorns growing towards one another.

7 . Make a small incision in the centremost point at the bottom of the fruit with a knife. Twisting the knife around will help you find that opening point.

8. To get rid of the pungent durian scent in your car or house, simply place charcoal or slices of bread at selected locations. Within a day or two, the smell should be gone.
Posted by Assoc. Prof. Dr. Richard Ng at 3:28 PM