Dr Sun Yat-sen’s numerous supporters in Malaya played a role in the revolution that changed the history of China.

THE many former tin mining towns in the Kinta Valley hide a wealth of stories – of unsung heroes whose sacrifices helped Dr Sun Yat-sen change the history of China.

Perak may not have been Dr Sun’s base, like Singapore and Penang, but its thousands of tin mine and rubber estate workers were instrumental in raising funds for the revolutionary’s activities.

Dr Sun, who played a key role in inspiring the 1911 Revolution which brought an end to the Qing Dynasty, the last imperial dynasty of China, is best remembered as the founding father of Republican China. But not much is known about his activities in then Malaya. 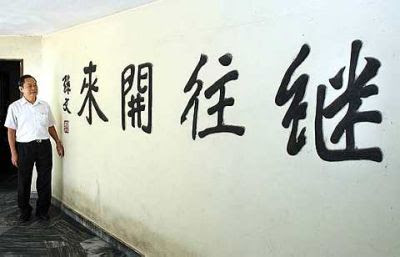 The words of Dr Sun Yat-sen are inscribed on a wall of the Sun Yat-sen Gallery in the Perak Cave Temple.

Stories from small, old towns are normally carried down the generations by word of mouth. Much information may have been lost along the way, and even the descendants of Dr Sun’s supporters have little to tell.

So it is not surprising that few have heard stories like Dr Sun’s romantic link with his bodyguard’s sister, Chen Cuifen, while in Nanyang (South-East Asia).

Chen from Fujian met Dr Sun when she was 17. Extremely dedicated to Dr Sun and his cause, Chen was his constant companion in Nanyang. She washed, cooked for many of Dr Sun’s comrades, delivered important documents, and even smuggled dangerous explosives.

Chen and Dr Sun’s first wife, Lu Muzhen, treated each other like sisters. Although not officially married, she was known as Dr Sun’s Nanyang wife to his descendants. 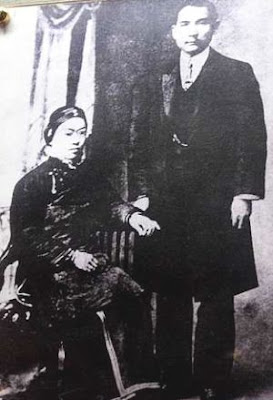 Family photos: A picture of Chen Cuifen and Dr Sun Yat-sen at the Sun Yat-sen Memorial Museum in Guangzhou.

On her death, she was allowed to be buried in the Sun’s family cemetery in Cuiheng village, Guangdong, China.

According to the late Foong Choon Hon, a director of the Sun Yat-sen Nanyang Memorial Hall in Singapore, on one occasion, stones and cow dung were hurled at the car carrying Dr Sun in Menglembu near Ipoh.

Foong said Dr Sun had also stayed in a shop belonging to his supporter Lee Guan Swee in Old Town, Ipoh. He would only leave the shop at night using the back lane for fear of assassins. 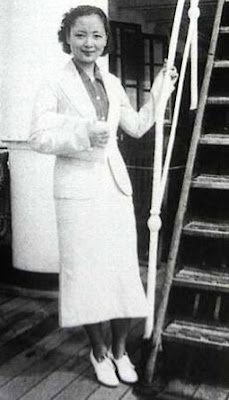 Dr Sun’s bad experiences with rich merchants made him realise that his core support came from the middle and lower social groups of overseas Chinese communities. His supporters organised themselves into small groups and were active in propaganda activities in the Perak towns of Lahat, Papan and Tronoh.

One of Dr Sun’s most loyal supporters was entrepreneur Teh Lay Seng from Ipoh.

When Teh passed away in Nanjing, China, in 1940, the Chinese Republican Government posthumously decorated him with words of praise: Benevolence and Loyalty, Honour and Peace were inscribed on his tombstone at the Hokkien Cemetery in Tambun. His sundry shop Keat Seng Leong is still being run by his descendants in Jalan Bijeh Timah, Ipoh

Lee Guan Swee, also from Ipoh, was another prominent supporter. The English-educated Lee was one of Dr Sun’s most trusted aides in South-East Asia. He spared no effort in raising funds for the revolution. Other supporters from Ipoh included Ke Shuijin, Ou Shengang, Li Xiaozhang, Tang Boling, Liu Yexing, Huang Yiyi and Liang Shennan.

Dr Sun also had the backing of Lu Wenhui and Chen Zhian from Taiping, and Yang Chaodong from Kampar. 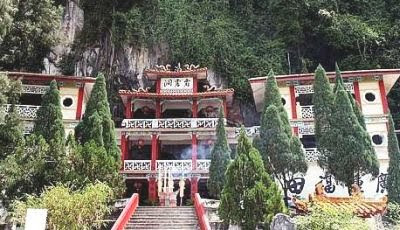 The Perak Cave Temple with a gallery on Sun Yat-sen in Ipoh.

Together they formed the Tung Meng Hui (the revolutionary Union League) in towns in the Kinta Valley, clubs and drama troupes, to spread their propaganda. One such drama troupe in Ipoh was the Perak Chisin Seah which later became the Perak Chinese Amateur Dramatic Association.

Dr Sun’s supporters addressed the general public at street corners, along roadsides and parks, and attacked the Qing government and Qing reformists, besides preaching revolutionary doctrines.

Dr Sun’s political career was marked by a series of failed uprisings. Between 1907 and 1910, several revolts at the Sino-Vietnamese border and Guangdong in China failed because of insufficient financial support and military supplies.

The now-defunct Straits Echo in Penang condemned Dr Sun and the revolutionary movement, saying that Dr Sun was all money talk and did not have anything to show for the stream of gold that flowed his way.

Dr Sun’s supporters also met with resistance from merchants who were sympathetic to calls for political change in China, but who were aligned to reformist Kang You-wei. Many of the rich were supporters of the Qing government which offered honorary titles and positions to them. The house where Chen Cuifen and Dr Sun Yat Sen stayed when they were in Taiping which is now a coffee powder factory.

On Nov 13, 1910, Dr Sun held the important “Penang Conference” at Armenian Street in Penang. He made an emotional appeal for funds but many rich Chinese businessmen were reluctant to associate with revolutionary politics as they were under the watchful eyes of the British in the Straits Settlements. The Penang contribution only came up to $11,500 (Straits dollars).

After the conference, fundraising campaigns were carried out in Ipoh, Taiping and Kampar, and they managed to hit the targeted $50,000 – a princely sum then.

The tin mine workers in the Kinta Valley, who were driven out of their homeland in China by poverty and the corrupt Qing government, were all fired up by Dr Sun’s revolutionary call.

It was said that the workers alone contributed $10,000 following the Second Guangzhou Uprising in April, 1911.

This was no small sum as the workers earned an average $8 to $9 a month. 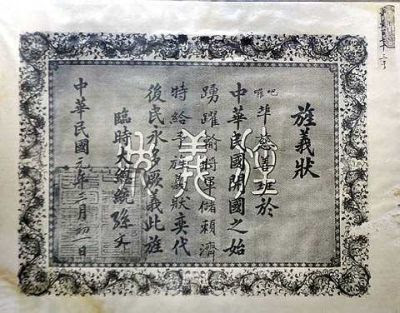 A certificate signed by Sun Wen, Dr Sun Yat-sen’s birth name, in 1912 presented to the Perak Chinese Amateur Dramatic Association in appreciation of raising funds during the Canton Floods and other charitable acts.

After deducting expenses for daily necessities, the worker could at the most save $4. He had to send money home to family members in China, after which he would be left with $1 to $2 a month. Going by the amount collected, the workers must have scrimped and saved every cent they could for the cause of the revolution.

A prominent revolutionary leader Hu Hanmin said: “These workers were so enthusiastic in donating funds. They often donated between $20 and $30 to the revolution. Some even wrote down their names first and tried to pay up later.”

Besides the tin mine workers, other members of the lower social group such as hawkers, rickshaw pullers and beggars also contributed to the cause of the revolution.

The success of the fundraising campaigns in Malaya served as an impetus for similar fund-raisers by the overseas Chinese in other parts of South-East Asia and America.

Some residents in the mining towns even sacrificed their lives for the sake of the revolution.

Gopeng Museum curator Phang See Kong said a Hakka tin mine worker, Wen Sheng-cai, from Kopisan near Gopeng, was so taken by a speech delivered by Dr Sun that he returned to China and tried to assassinate Qing official Admiral Li Zhun in Canton. His attempt failed and he was captured and killed.

Phang said three Gopeng residents, Eu Tong Hong, Wan Sang Choy and Kok King Mak, later took part in the Second Guangzhou Uprising and were killed. Their names are included in the list of 72 martyrs at the Huanghuagang Memorial Park in Guangzhou.

Revolutionary activities were again stirred up when news of the Wuchang Uprising reached the people.

On Oct 10, 1911, the New Army in Wuchang revolted and seized power, marking the start of the Xinhai Revolution or the Chinese Revolution, which eventually saw the end of more than 2,000 years of imperial rule in China.

Large-scale public meetings were held in Ipoh under the auspices of the Tung Meng Hui, the underground resistance movement organised by Dr Sun. As a result of the inflammatory speeches by supporter Teh Lay Seng, more than $8,000 was collected on the spot.

On Nov 3, 1911, mass meetings held to raise funds for the revolution were reported to have attracted some 4,000 to 5,000 sympathisers in Ipoh.

About 2,000 tin mine workers from Perak were said to have left for Guangzhou within a fortnight after the Oct 10 Revolution, to join in the uprising. Those that remained behind did all they could to raise funds for the cause.

Tin miner Foo Choo Choon, who by then had switched allegiance to Dr Sun, was appointed chief fund-raising officer in South-East Asia and $234,000 was remitted from Malaya and Singapore to help the revolutionaries secure Fujian Province.

Dr Sun termed the overseas Chinese as the “Mother of the Revolution” as their financial contribution was indispensable to the success of the revolution.

Perak once had the most number of Tung Meng Hui members in the country.

“There was an arch with the image of the Kuomintang flag on one side and the British King on the other side during the Double 10 celebrations,” he says.

Today, many of the buildings in Lahat, Pusing, Gopeng, Papan, Tronoh and Kampar where Dr Sun and his supporters had visited, have been demolished.

Dr Sun and his supporters were said to have held meetings at the Oi Low Club in Gopeng, the Anglo-Chinese Club in Papan, the Wah Seong Kok literary association in Kampar, and Teh Lay Seng’s bungalow in Jalan Sungai Pari, Ipoh.

Today, only remnants of the foundation of the Oi Low Club are visible at the site, while a four-storey building stands where the Wah Seong Kok association once stood. Teh’s residence has also been demolished to make way for development.

Few residents in Lahat remember that a settlement opposite the town was once known as Kap Meng Chun (Revolution Village) because the residents were Dr Sun’s supporters.

A cinema named in memory of Dr Sun, The Sun in Ipoh which locals called Chung Shan theatre beside the Kinta River, has also been torn down.

Other buildings established in memory of Dr Sun, including SJKC Chung Shan school in Ipoh, SJKC Chung Sun in Tronoh and SJKC San Min school in Teluk Intan are still in existence.

The Kin Kwok Daily News building in Old Town, Ipoh, still stands. The now-defunct Chinese newspaper was started by a Kuomintang supporter before World War II. The original masthead of the paper was written by Yu Youren, a Kuomintang scholar.

Perak Cave Temple chairman Chong Yin Chat said Yu was a friend of his father Chong Seng Yee, who was the last batch of graduates of the prestigious Whampoa Military Academy in Guangzhou.

Yin Chat had set up a Sun Yat-sen Gallery at the temple in 1995 in honour of the Father of Modern China.

On display at the gallery are photographs of Dr Sun, a bust presented by the Sun Yat Sen memorial museum in Taiwan, calligraphy works and reproductions of letters by Dr Sun.

An oil painting of Dr Sun in official uniform, graces the hall of the Perak Chinese Amateur Dramatic Association.

A framed certificate with the autograph of Sun Wen (Dr Sun’s birth name) dated 1912, expressing appreciation to the association for its efforts in raising funds for the Canton floods and other charitable acts, hangs proudly from the wall.

As these relics from the past lay largely forgotten by the masses, the few who remember them cherish the rich legacy and their vital links with an indomitable man who eventually became known as the foremost pioneer of Nationalist China.

Several descendants of Dr Sun from all over the world are expected to be in Penang between Nov 19 and 22 to attend the 22nd joint conference of the Sun Yat-sen and Soong Ching-ling memorials in conjunction with the International Centennial Celebrations of Sun Yat-sen’s ‘Penang Conference’.
Posted by Assoc. Prof. Dr. Richard Ng at 9:25 PM