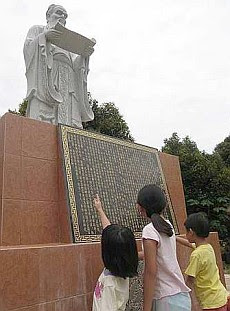 Educational: Children taking a close look at scriptural writings in front of a statue of Confucius.

KUANTAN: Visitors to Kuantan should not miss the opportunity to visit the famed Lao Zi temple located on 6ha of private land at KM12 of Jalan Sungai Lembing.

Every year, nearly 100,000 people throng the venue to pay homage to the founder of Taoism and for sightseeing.

The main attraction is a sculpture of the Golden Dragon listed by the Malaysia Book of Records as the longest in the country.

Visitors are taken on a guided tour into the dragon’s body, entering through its tail and exiting at its mouth.

The tour takes about 15 minutes through the 823m path.

Written on the walls are a 5,000-word scripture known as the Book of Tao and its Virtues.

Temple caretaker Kui Fook Weng, 40, said a devotee was blessed with good fortune if they made a wish as they exit from the dragon’s mouth and touch the pearl perched in front of the dragon’s majestic head. 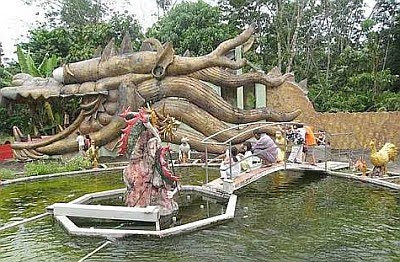 Place to explore: The fish pond features the head of the Golden Dragon.

“The dragon sculpture cost RM550,000 and was paid with my father’s personal savings and public donations.

“Work started in 2000 and was completed in three years,” he told StarMetro.

Kui said the land was inherited from his grandfather by his father Kui Wai Pong, 70, who built the temple after he dreamed about constructing a golden dragon. The temple boasts a host of attractions such as the 7m-high Lao Zi statue, brass sculpture of the Goddess of Mercy claimed to be dating to the Ming dynasty, statues of the 18 disciples of Buddha, prosperity Buddha, eight fairies crossing a river, a fish pond surrounded by the 12 zodiac animals, the Monkey God, a pair of longevity and prosperity tortoises and a pair of earth dragons.

It is landscaped with fruit trees, rocks inscribed with the virtues and an antique house.

Kui said that most of the antiques were of Chinese origin comprising porcelain, ancient stone carvings, brassware and other artefacts.

He said the temple received many visitors daily, especially on weekends and public holidays, including Singaporeans and Malaysians on day trips to Kuantan.

The father-son team dedicate their time and resources to promoting the temple and upgrading the premises to give it a fresh look.

“There’s something unique every time a visitor makes a return visit. We are not static and will continue to evolve with the times,” he said.

Kui said they had added a statue of Kwan Tai riding a horse earlier this year and in August unveiled a 2.4m statue of Confucius brought in from China.

He said that thousands congregated at the temple during the two occasions for the consecration ceremony that included prayers, singing, cultural performances, Chinese calligraphy demonstrations and lion dances. 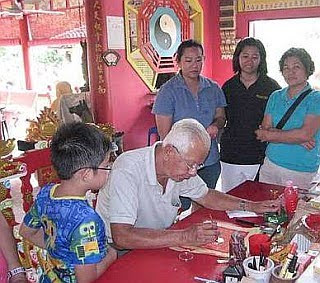 “Other sculptures include the 18 Levels of Hell, an artefacts museum and refurbished works all over the premises,” he said, adding that he was grateful to the MCA and the state for surfacing the 1km road leading to the temple.