Where do foals come from? - Star

When Tanjung Rambutan is mentioned, most people automatically think of a mental asylum. Few people outside the racing fraternity know the existence of the National Stud Farm (NSF). Security is tight and only staffers are allowed in.

The idea was first put forth by our first Prime Minister Tunku Abdul Rahman Putra Al-Haj and the farm was established in 1969 by the Malaysian Totalisator Board. It is the only commercial thoroughbred breeding farm in South-East Asia and its horses are registered in the Malaysian Stud Book, which has been internationally recognised since 1996. Basically, it means these horses can race anywhere in the world.

NSF’s mission is simple: to develop the breeding of thoroughbred racehorses in Malaysia, to reduce the reliance on imports and to develop equestrian sports. Pan Malaysian Pools Sdn Bhd assumed management of the farm in 1991. 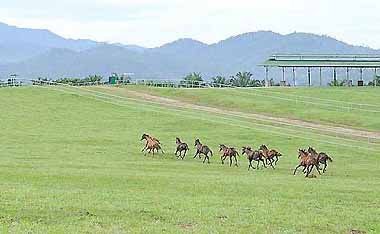 Young horses going through their exercises at the National Stud Farm in Perak.

Spanning over 97ha (240 acres) of land, facilities at the farm include two six-horse rotary exercisers, an equine clinic and laboratory, a training track, practice starting gates and a horse treadmill. The stables are well ventilated although not air-conditioned.

Breeding is done year round but the mating season is restricted from Sept 1 to Nov 30 every year. Since the gestation period is 11 months, the foaling season is therefore between August and November, coinciding with the breeding season.

“Mares are more receptive when they’re in heat. We use ultrasounds to monitor when they’re ovulating and when the time is right, we put a stallion in,” said Dr Thang Su Ling, NSF’s senior manager.

“Since we have about 92 mares and three stallions, the stallions are under worked! They can do more!”

Stud services are provided by selected stallions and the farm has its own band of broodmares with imported pedigrees. Dolphin Street is NSF’s top stallion and it “services” 35-40 mares a season. 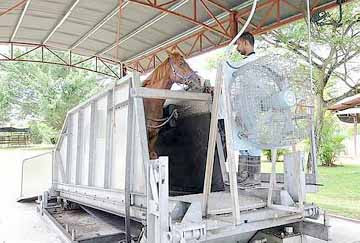 Periodic examinations are carried out to ensure that the mating has been successful and towards the end of the foaling, these mares are watched round the clock for imminent foaling.

Dr Thang added, “Once it delivers, dams hardly go back to racing. It’s too much hassle because it takes time for the body to readjust, so after pregnancy, we keep them for breeding purposes.”

There is also a high dropout rate. For example, for every 100 mares that deliver, only 60 foals are capable of racing. 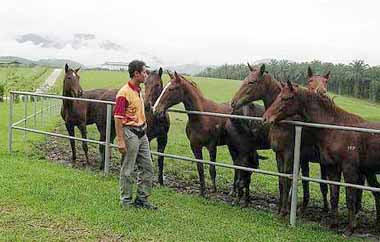 Dr Thang Su Ling’s favourite spot is here, where the yearlings come in from the meadow to joyously greet him.

“We’re looking at a span of three years before they’re sold, which includes the 11-month gestation period. The pregnancy rate is usually 85%, 5% miscarry and 2% are born with complications. From foal to yearlings, there’s a 10% drop out and from one to two years, another 5% drop out,” he said.

That’s how the horses are screened. It’s the survival of the fittest. At the end of the day, winners are determined by the genetic compatibility between the sire and the dam, no matter which pedigree they come from. There are currently 268 horses at the farm, including 15 stallions, which were just imported this year.

When he was a varsity student, Dr Thang did his attachment at the farm, loved it and decided to stay on after graduation. The veterinarian’s favourite spot is where the yearlings graze on the undulating terrain, with Mt Korbu in the background.

When the horses see his car driving by, they canter over to greet him at the fence, like children waiting for treats. Apparently, the colts and fillies are already separated when they turn one.

“Yes, they can get randy at one so we have to keep them separated!” chuckled Dr Thang.
Horse sense

Foal: a young horse of either gender, under one year old

Colt: a young male horse, usually below the age of four

Filly: a young female horse, usually below the age of four

Dam: the mother of a horse

Sire: the father of a horse

My name is Farhana. I would like to ask if National Stud Farm have any other contact number or email? because i've tried to call using the number given, but i can't reach them.