Wok Over To Penang - NST 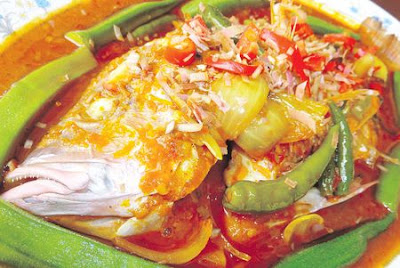 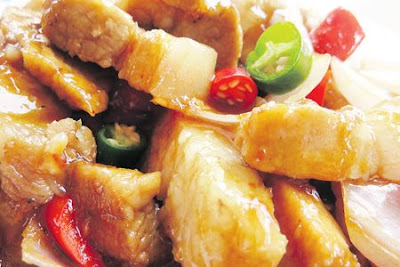 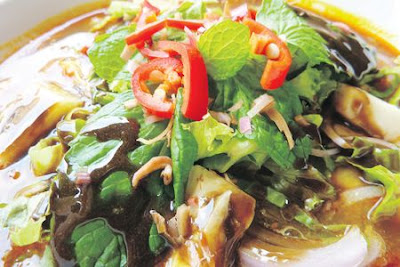 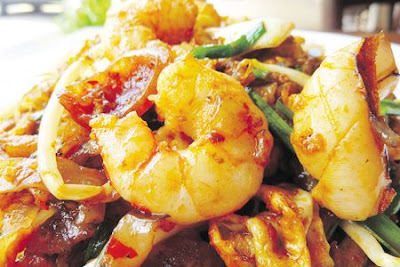 Char kway teow is worth every bit 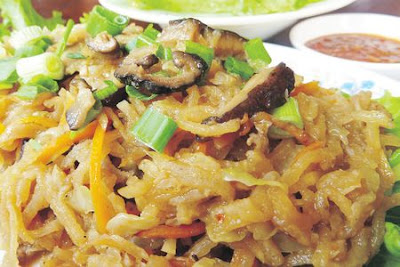 If you crave for Penang nonya cooking, char kway teow, prawn mee and asam laksa, you don't have to go to the island. TAN BEE HONG finds it all at The Wok

IN the midst of all the modernity that's The Strand in Kota Damansara, it's a little thrill to walk through elaborately carved wooden doors gilded with gold paint.

But then The Wok Cafe is an oasis of Penang nonya cuisine in a township with a high concentration of mamak and kopitiam outlets. The corner shop is airy and pleasantly cool without a blasting shock of cold waves from the air-conditioning to turn appetising hot food into congealed servings.

Inside, old wooden tables with marble tops add to the ambience of being inside an old nonya house. On the walls hang old pictures of nonya women with their sanggul, and of Penang in the 50s when policemen wore flared khaki shorts and motorcars were only for the rich and famous. The only thing that seems incongruous with the decor is an LCD television set hanging from the ceiling.

Most of the rich trappings on the walls, the old carved doors and frameworks come from the private collection of restaurateur Mervyn Yeoh's father, Robert. The Wok has a sister restaurant, Hot Wok, in Burmah Road, Penang.

"I first learned to cook by watching his grandmother in the kitchen. I've always liked fiddling around in the kitchen and I enjoy good food. I've been cooking for 15 years," says the much-tattooed Mervyn, 33.

The char kway teow (RM8) is quite impressive, with lots of wok-hei (frying at high temperatures). There are no cockles but Mervyn makes up for it with lots of prawns, squid, fish cake and Chinese sausages. The prawns are big, fresh and crunchy, Not only that but he's probably one of the few chefs who uses lard to fry the noodles, resulting in a fragrance that only those who've had char kway teow with lard will identify with immediately. There are bits of crunchy fried pork fat hidden in the noodles.

Asam laksa is an explosive serving. Rich with the flavours of fish and the various herbs like mint, daun kesum and bunga kantan, the aroma is totally irresistible. Black prawn paste (heh ko) adds to the flavour and if you like more of it, help yourself from the dispenser. The asam laksa is as fiery as it looks, so unless you have a tongue weaned on chili padi, maybe you should stick to char kway teow and prawn mee. Or have some chee cheong fun, flat rice noodles with lashings of sweet sauce, chili sauce and heh ko -- Penang style. A sprinkle of sesame seeds and fried shallots is the cherry on the icing. Would have preferred the chee cheong fun to be unraveled instead of being chopped in rolls.

But it's not all noodles. Diners come in for home-cooking and usually nibble on otak-otak (RM5) and lorbak (RM10) while waiting for the main courses to come.

Wrapped in banana leaves, the otak-otak is fish fillet steamed with egg, herbs, lemongrass and santan. I find it a tad on the bland side though. The deepfried lorbak is stuffed with pork marinated in five-spice and rolled in beancurd sheets. Eat this with the thick brown sauce and chili sauce provided. "We buy the five-spice powder from Penang. The cheaper local version isn't good enough," says Robert.

We also have jiu hu char (RM10). The yambean is finely shredded and cooked with carrots, cabbage, mushrooms and dried cuttlefish. To eat, just fill a leaf of lettuce with this and sambal belacan.

The Wok is mostly about foods served in Penang nonya households on a daily basis. Mervyn says: "A customer told me his aunt could cook the dishes he had just eaten. That's probably so but where is his aunt? He gave me a sad look and said she had passed away. That's the point. We offer home cuisine that you may not be able to get anymore or have the time to prepare."

Like perut ikan (RM9). Literally translated as fish stomach, it's a nonya favourite where pickled fish stomach and roe are cooked with finely sliced daun kadok, pineapple, longbeans, brinjal and various herbs in a tangy and spicy gravy. Not all nonya restaurants offer this as it's time-consuming to shred the vegetables and pound the spices. The fish roe is lovely but I find the fish stomach tough as leather.

We also have a whole red bream for gulai tumis (available with fish fillet, stingray or prawns too). The piquant, tamarind-based gravy is aromatic with herbs like daun kesum and ginger flower. The fish comes with lady fingers and do watch out for the whole chili padi. One bite could immolate your tastebuds.

Pork cincalok (RM14) gets the thumbs-up from everyone. Thick slices of belly pork are stirfried with cincalok (tiny shrimps pickled in brine), onions and red and green chilli. The salty edge of cincalok brings out the best side of the pork, with onions adding a contrasting crunchy texture.

Then there's asam prawns. Marinated in juice from the tamarind fruit, these fried prawns turn my eyes watery with nostalgia. They are just like how Mama made them -- shelled with the head and tail intact to let the tamarind flavours seep into the flesh -- and served with sambal belacan and cucumber.

For dessert (RM4.50), we have sago nangka and mango cendol.