Smell of a sweet deal - The Sun 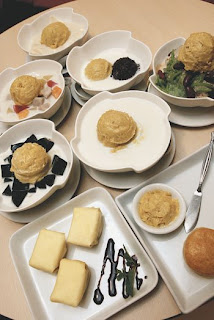 Delectable desserts that come with the sweet, strong aroma of durians at
Sweet Chat’s A Royal Affair promotion for the whole month of May.

THERE’S a little open café tucked at one corner of South Court in Mid Valley Megamall that’s serving a right royal feast for this whole month.
Situated just two floors below GSC cinema, Sweet Chat Café is ready to set mouths watering and noses twitching at its offerings of the king of fruits in eight delectable desserts during its A Royal Affair promotion.

That’s right, lovers of durian can now partake of the fruit in all its aromatic freshness in the cool comfort of a mall. There’s the outlet’s crowd favourite of durian pancake – little nuggets of durian flesh wrapped in a wafer-thin pancake; chilled pulut hitam paste with durian – dollops of boiled mashed pulut hitam and durian flesh served together with coconut milk; and the ever-popular durian cendol.

New on the menu are durian with such interesting combinations as grass jelly, scones, soya bean jelly, almond cream and bubur cha-cha.

The price? From RM6.90++ onwards but says Sweet Chat’s franchise manager Lim Siew Lay, during this promotion, the outlet is offering the durian pancake at RM5.50++, and cendol and pulut hitam at RM6++.

She adds: "Our customers love these three durian desserts which prompted us to go further with the fruit in this promotion."

Brand manager Kwan Lynn-Ee says they experimented with the combinations for a month before deciding on the five to add to the menu.

Sweet Chat is a halal café serving desserts and light meals set in the style of Hongkong cafés. Opened in June last year, the outlet is the first of this new sideline for parent company TCRS Restaurants Sdn Bhd, which runs the popular The Chicken Rice Shop franchise.

Two more branches are in the pipeline, targeted at malls in the Klang Valley.

TCRS director Wong Kah Lin says their intention is to make Sweet Chat a third stop for their customers after their home and office; a place they can go to for a bite and chat.

Besides serving desserts (a selection of 26 ‘sweet endings’ both hot – such as almond cream with tong yuen, sago pudding and gandum; and cold – like red ruby, tutti fruiti grass jelly and strawberry volcanics), the café also offers tuna and chicken sandwiches and other light meals.

They include baked veggie with creamy white sauce, topped with cheese and served with nachos; melties which are toasted focaccia bread topped with melted cheese and a choice of barbecued chicken or chicken bologna with nachos; and honey BBQ chicken burger (sumptuous whole cut of honey barbecued chicken chop in a bun with tomatoes, cucumber and lettuce with a side serving of nachos).

There are also a noodle salad that comes with a spicy Turkish dressing and spaghetti with black pepper chicken or spicy oriental minced chicken.

Not to be missed is Sweet Chat’s latest offering of spicy smoked beef pasta which is an adaptation of the Negri Sembilan dish of masak daging salar chilli api. The pasta has the hot tang of chillies with a strong kunyit taste while the smoked beef is meltingly tender.

Another must-try is the yam cake (RM5.50++) which is "just the way grandma makes it" with plenty of yam and served with a special chilli sauce.

The café also has a wide choice of drinks, from hot tea by the pot, and coffee like a local latte or Brazilian coffee, to cold thirst quenchers that range from fizzy sparkling juices to shaved ice concoctions and iced Irish coffee. Prices start from RM5.90++.

Sweet Chat can seat 76 people at a stretch and is open daily during mall hours.