WITH a shortage of places to enjoy Country & Western music in the early 90’s, Hedley Westerhout took matters into his own hands and opened his own place.

Thirteen years later, Country Barn has evolved from a Country & Western Pub to a restaurant that is a staple part of the community.

Off the main road in USJ 11 and minutes away from the bustling Taipan area, Country Barn is a retreat by day and a showcase of talented bands after dark. A different band plays every night, and at one point for a Charity Music Fest, they all played one after another for 24 hours straight. 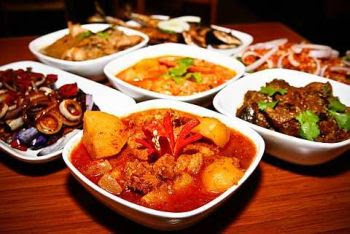 Mouth-watering: Some of the dishes at the restaurant.

“People have suggested that we change our name to Charity Barn,” Westerhout said.

“There is a shortage of decent family pubs, and that’s what we are. We used to be called the Subang Jaya old Folk Home.”

Patrons have access to Wi-fi in a cozy atmosphere with unconventional deco, and most importantly, the authentic Malaccan Portuguese menu at their fingertips.

Terry (Red FM Drive) and I sit down at the most sought after table.

“It’s at an equal distance from the dancefloor, the bar, the pool table, and the restrooms,” Westerhout said.

Margeret De Silva (or Aunty Margaret as she is fondly known), assumed the role of chef here just over a year ago.

“Is it hard to cook for so many people? I asked her.

“It’s what I would do every day at home!” she answers candidly. “For many more family members!” chirped in Terry helpfully.

Being both half Eurasian, Terry and I were no strangers to the cuisine and family atmosphere that exudes from Country Barn’s four walls.

“This is just like my mum used to make, God rest her soul,” Terry said as he tucked into the Cencaru Sumbat, crispy, deep-fried Cencaru fish stuffed with sambal.

I found myself mimicking his satisfied noises as I savoured the Chicken Pong-teh, a Malaccan Portuguese stew. Slightly sweet and salty and utterly scrumptious.

One of my favourites, the Brinjal Soy Limang, did not disappoint — Pan Fried Aubergines saturated in dark soya sauce, chili, onions and shrimp paste. This was followed closely by the addictive Bendi Pas’agu, which are stir fried ladies fingers smothered in a belachan chili sauce.

The most popular dish on the menu is the Debal Curry.

There are many versions of this curry. You can call it Devil, Devel, Debil or Debal. The basic “rempah” is the same, it’s the hands that cook it that gives it variety.

The Debal Curry at Country Barn is a blend of chilli, onion, lemongrass, galangal and mustard seeds, cooked till fragrant and is as authentic as it gets.

Terry and I yelped with excitement as we were presented with a plate of Pang Susi.

I haven’t had these in years!

Biting into the soft, fluffy sweet bun to reveal a savoury mince filling, I was transported to my childhood days at my grandmother’s place in Malacca.

Because making of these delicious buns are labour intensive, they are available by special order only. Don’t miss out on the delightful pineapple tarts and make sure you have a cup of sweet tea to wash it down.

From Charity Drives to home cooked Malacca Portuguese cuisine, this is a place with a story to tell, and a place where everyone really knows your name. If they don’t, it’s only because you haven’t been there. Yet….

Tune in to the Big Red Food Review with Aly for your chance to win RM50 vouchers to Country Barn. 20 x vouchers up for grabs!