AN Indian temple near Zenith Park in Taiping has turned into a night safari of sorts, attracting hundreds of visitors nightly.

The star attraction is not some prized animals but wild boars which temple visitors claim are bringing them good luck.

Although aggressive by nature, the animals seem to have become quite domesticated and are allowing visitors to caress them.

Some visitors claim to have struck a small fortune at four-digit outlets while others claim that sufferers of incurable illnesses have been cured after stroking the animals. 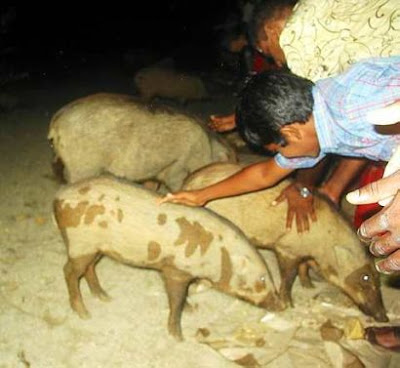 Temple volunteer N. Mogan, 45, said ever since the wild boars began frequenting the fringes of the temple in April, the number of nightly visitors had swelled especially on weekends and public holidays.

The boars usually turn up at the temple grounds when the bells toll to mark the time for evening prayers at about 7.30pm.

“Previously only a few wild boars turned up but lately, it is common to see about 30 of them,” says Mogan, a tow truck driver. 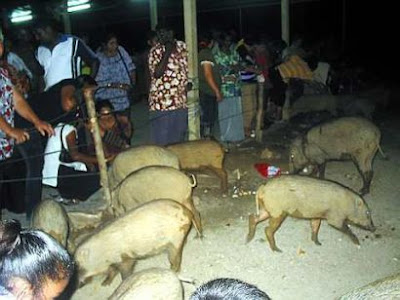 Star attraction: These wild boars are a major draw for visitors from as far as Singapore and Taiwan.

He often goes to the temple in the daytime to cook the boars’ favourite meal — rice with canned sardines.

“We don’t charge the visitors any fee but those who want to donate can buy the cooked rice at RM1 per packet to feed the animals,” he said.

The collection was for the temple’s coffers, he said.

He said some visitors came back to offer donations to the temple after their wishes were fulfilled.

Some even came in chartered buses from as far away as Singapore and Thailand. 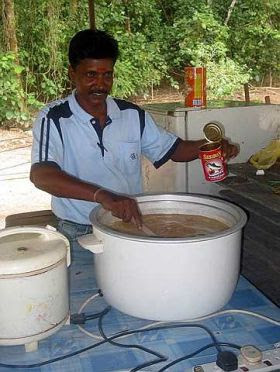 Mogan making broth with sardines for visitors to feed the boars at a fee.

“We have also received visits by priests from Thailand,” he added.

Mogan said so far, no one had been gored by the animals as most of the boars appeared to have adapted to human presence

After a hearty meal, some of the young animals do take a nap before heading back to their jungle hideout before dawn.

Mogan said the temple had not received any complaints about the presence of the wild boars.

A nearby temple is also cashing in on the sensation by charging RM2 for each vehicle parked within its compound.

Perak Department of Wildlife and National Parks director Shabrina Mohd Shariff said the department would look into the issue once a public complaint was lodged.

“If there is a complaint, I will send my officers there to investigate,” she said. Although wild boars were protected species, she said the department did issue hunting licences 14A (for hunting of game animals) and 19A (for consumption, medicinal purposes or selling of game animals) as there was an “over-population” of wild boars in Perak.
Posted by Assoc. Prof. Dr. Richard Ng at 8:45 PM